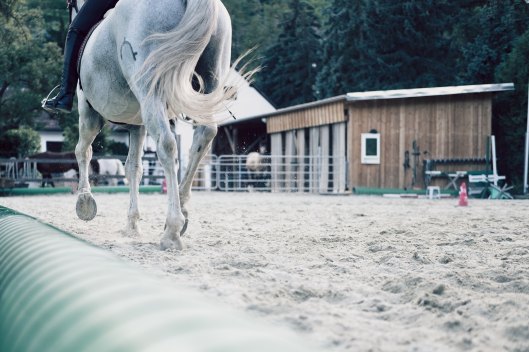 Photo by Thomas Peham on Unsplash

It was an early spring day and the horse and I were both enjoying being in the large outdoor arena after training inside for much of the cold winter.  We had transitioned easily from a walk to a trot to a canter when suddenly with no warning the horse took off in a full gallop.  Caught by surprise, instinct caused me to tighten my legs around the horse’s sides and pull tighter on the reins.

I’m not sure if the horse read my movements as a cue to go faster, if he was spooked by something or if he was just generally in a feisty and rebellious mood, but the harder I tried to control the horse’s speed, the faster he ran.  Eventually our surroundings became a blur in my peripheral vision as he wildly sped along, grazing my leg along the fence rail.

I called for my trainer who had gone to the barn to retrieve some equipment.  “Somebody help me!” was all I could think or say as the panic transferred from me to the horse.  I had been taught the emergency dismount but executing that from a horse who is walking and one who is barreling ahead full speed are two different things.  I eventually decided my best bet was to bail.  Releasing my feet from the stirrups, I swung one leg over the saddle and jumped!

The harder I tried to control the horse’s speed, the faster he ran.

Sprawled out on the ground staring at the sky, my first thought was whether I could move.  My trainer who had arrived by then asked, “Are you okay?”  Slowly she helped me to my feet and we assessed the damages.  My riding helmet had been split down the middle and while I could walk, there was an odd discomfort in my lower back.  I had broken my tailbone.

Fortunately my riding mishap was not nearly as disastrous as it could have been and a broken tailbone will heal with time.  The problem was my husband and I were scheduled to leave early the next morning for a vacation in Cancun.  We had found a terrific deal and prepaid for the all inclusive package of airfare, hotel and food.  Since I had not purchased travel insurance there was no “Plan B” so I insisted that we go on the trip even though I knew I would be doing nothing other than sitting by the pool.

Normally my husband likes to stay active on vacation.  He golfs, fishes, scuba dives and generally has something planned every day.  I told him to feel free to do whatever he wanted to but obviously since every tendon, ligament and muscle connected to my broken coccyx was sore, I would be planted in a lounge chair and leaving it only for necessities.

Whether it was pity that moved him or he actually desired my company, my husband decided to stay with me at the pool all week.  We’d had many vacations and he had never spent one of them poolside!  Nonetheless, he took out a book he had brought along and began to read.  This was the first vacation ever where he had read an entire book.  And he actually enjoyed it!  As the week progressed, we had long conversations, relaxing meals and s-l-o-w walks back to our room (S-L-O-W-L-Y was the only way I could walk anywhere that week!)

Oddly enough, my adventure seeking husband says that was the most relaxing vacation he has ever had.  Maybe it’s because he had been forced into a slower pace, less activity and a place of quiet calm.  It’s not the vacation we would have chosen or had planned but was perhaps the one we needed.

Oddly enough, my adventure seeking husband says that was the most relaxing vacation he has ever had.

In our fast paced, multi tasking culture, it sometimes feels like we’re riding on that runaway horse that won’t stop and won’t let us get off.  I know many people who struggle with finding Sabbath in their lives, a time of rest, a place of reflection.  I find the wording of the 23rd Psalm interesting. . . “He maketh me lie down in green pastures.”  Sometimes, I think he literally has to make us because we either won’t or don’t know how to get off that galloping horse!

As a writer, I follow several blogs, podcasts and newsletters.  I was surprised this past summer when more than one of my favorites took a rest period . . . no writing, no recording, nothing in print.  They were clear about their intentions.  To call a halt to the grind and the pressure, to create space for family and free time, to return to their work restored in body and soul.  I had to especially admire a couple of them who are well known and sought after authors and speakers, those whose careers could have been put at risk by taking a time out.  I believe it requires a lot of listening to your gut instinct to make those judgment calls and a lot of courage to carry them out.

In our fast paced, multi tasking culture, it sometimes feels like we’re riding on that runaway horse that won’t stop and won’t let us get off.

I love the words of Isaiah 30:15, “In returning and rest shall ye be saved; in quietness and confidence shall be your strength.”  Our bodies and minds were made with the need to restore and refocus through rest.  I know it’s not always possible to have a week in a lounge chair in Cancun but we can carve out small niches of time and reign in our galloping horses long enough to connect quietly with family or a friend, spend uninterrupted moments in prayer, breathe in the beauty of a natural surrounding or just close our eyes and call a halt to chaos around us.  For it is then that “He restoreth my soul”. (Psalm 23:3)

Next month I am planning a trip to the Georgia Mountains with my sister and a friend.  I’ve already reserved an afternoon of horseback riding while I’m there.  Since my misadventure on the horse, I have learned to “spiral stop” a horse by reining him back in on himself which eventually causes him to slow  down.  Hopefully I’ve learned to rein myself in when needed as well.