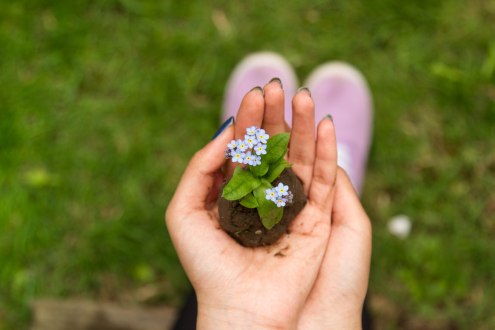 I had only met her for the first time that day so I was a little hesitant to ask.  Tattooed on the back of her neck were three slender arrows, an ink design unlike any I had seen.  “Tell me about the arrows.”  I casually threw the words out like a Saturday fisherman casting his line.

Lips spreading into a warm smile she replied, “Those represent my three children.”  She then proceeded to reference the scripture from Psalm 127:4, “Like arrows in the hands of a warrior are children born in one’s youth.” I knew the scripture well and loved the imagery it brought to mind.  As I talked to this young mother of three, I remembered vividly the tender and trying years of bending, flexing, shaping, pulling and preparing my three offspring for their future flight.

Now, watching each of my adult children soar into their God ordained destinies, I sense a bit of me encapsulated in their fierce and focused speed.  Although their representation is not inked on my body their essence is etched upon my soul.  The primal instinct is and always will be to preserve and protect that which came from my very own being.  And if there’s anything in the world that would call me to be a warrior, it would be those three, their offspring and the mates they have chosen for life!

Those represent my three children.

I love the account of the Jews rebuilding Jerusalem’s walls recorded in the book of Nehemiah.  Listen to his strategy (Nehemiah 4:13), “Therefore I stationed some of the people behind the lowest points of the wall at the exposed places, posting them by families, with their swords, spears and bows. . . Remember the Lord, who is great and awesome, and fight for your brothers, your sons and your daughters, your wives and your homes.”   A stirring call to arms to defend the ones they most loved, Nehemiah no doubt knew it was their best bet at protecting the wall.

The original war cry was heard when God declared to Satan, in the Garden of Eden, “And I will put enmity between you and the woman, and between your seed and her seed;” (Gen. 3:15)   Ever since that time it has been the agenda of the enemy (and his wicked and carnal seed) to destroy and desecrate all that is holy and good.  And to this day it is within the power and position of the righteous to protect that sacred seed.

I remember a few hours after giving birth to my first child that I felt an inner strength I had never known before.  I was aware that for the first time I would instinctively give my life to save his without thought or premeditation.  The warrior inside of me had been born on the same day as my infant son.  My job going forward was to protect and preserve that precious life I had been handed.

And to this day it is within the power and position of the righteous to protect that sacred seed.

Two Old Testament stories that come to mind highlight this recurring theme.  One is the story of Moses.  When the Egyptian Pharaoh had specifically given orders that all Hebrew male babies were to be murdered, Moses’ mother hid him for three months at home then later prepared a papyrus basket where he could be hidden among the reeds of the Nile.

Moses’ sister, Miriam, protected the baby by watching her brother in his boat basket from afar.  It was Miriam who later suggested to the Pharaoh’s daughter who discovered him that she bring a Hebrew nursemaid to care for the child.  And until the time he was weaned Moses’ own mother was allowed to nurture and nurse her son.  It’s a beautiful picture of a mother and a sister protecting the seed who would later become the great leader of the Hebrew people.   His God designed destiny was made possible because of their attentive care.

Another story I love is from 2 Kings 11.  Upon learning that her son was dead and would not inherit the throne,  power hungry Queen Athaliah went on a killing rampage in an attempt to destroy the entire royal family.  But Jehosheba, the aunt of young Joash, hid him and his nurse in a bedroom and then in the temple for six years.  At the seventh year she brought him out and had him crowned the rightful heir to the throne.  This time it was an aunt who did the important work of protecting the seed and consequently defining a destiny.

Scripture is full of blessings promised to the seed of the righteous.

Is there a child in your life who carries a promise for the future?  Then there is an enemy who wishes to annihilate that plan.  Our job as their protectors is to run interference between them and the one whose agenda it is to kill, steal and destroy.

One of the scriptures I have written in my prayer journal is Lamentations 2:19, “Arise, cry out in the night, as the watches of the night begin; pour out your heart like water in the presence of the Lord.  Lift up your hands to him for the lives of your children. . .”   God, don’t ever let us be too lazy or too preoccupied to pray for the protection of the children in our lives.

They are full of promise and possibility.  They will see tomorrows that we may never know.  They carry a divine destiny that is uniquely their own.  They are God’s masterpiece and His prized possession.   Let’s protect them with all we have and all we are.

Then let’s pull back the bow and let those arrows fly!

2 thoughts on “Protecting the Seed”